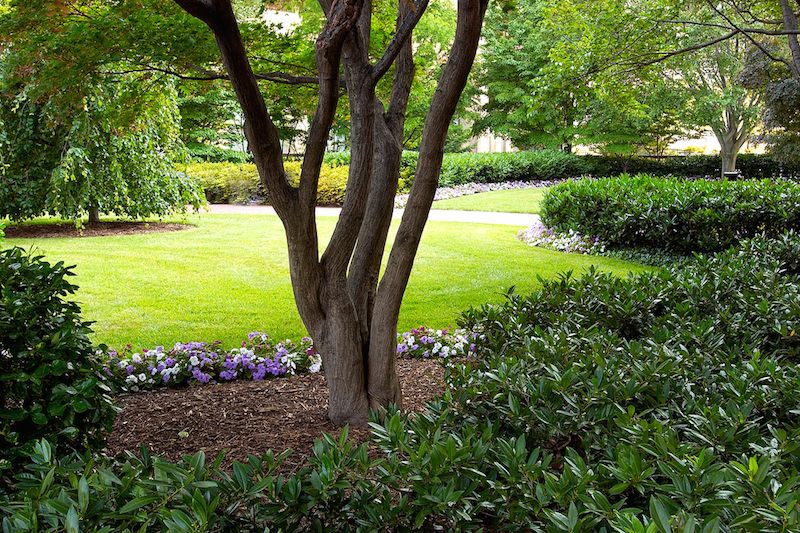 Soil in the Southeast, especially in the Atlanta area, is full of clay. Clay-rich soil is notoriously alkaline, dense and tacky, which can mean a great deal of trouble for those hoping to work the land. Because of its inherent properties, the soil is heavy to lift. It is also prone to frost heave, over saturation and compaction, which can prohibit healthy root growth. On a positive note, commercial landscaping in Atlanta includes routine core aeration and soil amendment.

Core aeration is a part of commercial landscaping in Atlanta because it improves top growth, spurs microbial activity, increases rooting, decreases run-off and allows natural soil amendment to take place. It is often worked into an Atlanta property’s commercial landscaping schedule at least once annually. Although, there have been occasions when it must be done more frequently.

In general, the area scheduled to be aerated is watered at least 24 to 48 hours before the actual, mechanical aeration process begins. The water helps soften the ground, which enables the machinery to operate at peak efficiency. At the same time, commercial landscaping crews mark all areas that should not be touched with the aeration equipment (e.g. subsurface irrigation lines and underground wires).

Next, commercial landscaping crews ready their core aeration machines, which come with a choice of hollow tines. The hollow tines come in a combination of sizes and spacing combinations. They are designed to puncture the clay-rich soil, pull out and discard cylindrical-shaped pieces of compact dirt commonly referred to as cores. The cores are typically discarded on to the soil’s surface and left there so they may break apart and eventually become part of the top soil.

When the core aeration machine is ready, it is run across the Atlanta property in a criss-cross pattern until the entire, designated area has been covered. Afterward, the soil is typically amended while the ¼ to ½ inch wide and 2 to 4 inch deep holes are still fresh. Amendment may include adding water, organic and inorganic materials. To find out more and schedule core aeration for your property in Atlanta, please contact the Chapel Valley Landscape Company.

We Are Looking for Snow Management Contractors